The Story of Dogs - original work

Dogs are one of man’s closest animal companions.  Human beings see a lot of themselves in the dog.  We admire their traits of loyalty, bravery, and humor.  Wild wolves and dogs live in very structured packs, based on family which is another trait people can identify with.  Dogs did not always live with people, but it turns out that people needed dogs and so they found away to each other in a little village.

There was cause for great celebration in the village the day the brothers were born.  The chief’s daughter-in-law had given birth to twins.  The chief threw a huge party for his first born grandsons.  They were strong boys with mops of black hair, pools of dark liquid for eyes and  branches for limbs.  They were so much the same their mother could hardly tell them apart.  Where ever one went the other was sure to be right there by his brother’s side.

As they grew they turned into sturdy young men, strong as cedar trees.  The brothers were the favorite of their grandfather, for he was a wise chief and knew that these boys were special.  He taught them in the ways of their people; knowing that one of them would some day be the leader.  They patiently learned the stories about Raven and other tales of their people.  There favorite stories were about brothers.

Their father taught them to hunt and fish.  They loved to go out fishing together most of all.  They would paddle out onto the ocean and work together and catch the biggest halibut anyone had ever seen.  The brothers spent all their time together hunting, fishing and helping their family.  Soon it was time for them to get married.
Their father and grandfather chose them the most beautiful brides in the village.  The brides were sisters with eyes gray like morning mist, noses like perfect sea snail shells, and a smile that radiated the sun’s warmth.  The twins were very happy.  They went hunting to bring back gifts for their new brides.  There spirits were with tem when they found two white sea otters.  The pelts were as beautiful as there soon to be wives.  The whole village feasted for days and all too soon the brothers went back to their normal lives.  They moved into a big long house together with their brides.

A few months after the wedding the brothers decided to go on a hunting trip up to the mountains.  They packed up their tools and supplies, and then set out up the path into the woods.  The younger twin’s wife old him she was going to have a baby soon.  The twins were very excited as they set off into the woods laughing and joking.  On this trip they thought it would be good to bring back a special gift for the younger brother’s wife.

They came around the corner and there was the perfect gift.  A big black wolf was standing in the middle of the path.  Fearlessly the wolf looked at them and the younger twin said he would kill it alone for his wife.  The older twin did not like this idea, but wanted to honor his brother’s request.  The younger brother took off after, the wolf and it began to lope away.  The older twin continued on to the hunting camp.

When his brother did not return by night fall he began to worry.  In the morning his brother had not come back.  He went down the path to where the twins had parted ways and began to look.  To his great sadness not far off the path he found his dead brother and the dead wolf.  He wept enough tears to fill the ocean.  He picked up his brother’s body and skinned the wolf.

He came back to the village with great sadness in his heart.  The whole village mourned the loss of a good hunter and the chief’s grandson.  The older twin was inconsolable; he would speak to no one but his grandfather.  He was very troubled by the dreams he kept having about the black wolf.  The brother went through many months of this as he watched his brother’s wife get rounder and more pregnant.

He decided he must do something about this sadness and went to the medicine man for help.  The medicine man sent him on a quest back into the woods.  He made sure the two wives were taken care of and promised to be back soon.  To prepare for this the brother fasted and spent time in the sweat lodge.  He cleansed himself to prepare for the journey.  Finally he set off with few supplies into the woods.

The brother walked until he felt tired.  Then he walked farther pushing the weakness aside.  Finally he was so weak and tired that he fell.  He pushed himself back up and walked a little bit more.  Then he fell again and could not get up.  He lay there thinking of his brother and how much he missed him.  The older brother fell asleep there in the middle of the path.

After some time he was woken up by gentle licking on his face.  He opened his eyes and saw a tiny black fuzzy ball.  He sat up and looked it over discovering it was a wolf pup.  The brother tried to push it away, but the pup would have none of that and kept trying to play with him.  The brother opened his bag and ate some dried salmon, he was starving.  The pup begged shamelessly for a bite and the brother tossed him some.

The older brother sat there wondering what to do with this wolf pup.  He smiled as he watched its antics.  He kept throwing little bits of salmon to it.  He reached down to scoop up the pup, holding it up he looked into its eyes.  What he saw almost caused him to drop the creature.  It was his brother in those eyes.  The older twin tucked the pup in his bag and set off for home with a smile in his heart.

When he arrived home he went right to his grandfather and showed him the pup.  His grandfather was overjoyed.  The brother brought the pup to his home and the younger twin’s wife recognized him immediately.  In a matter of weeks the pup grew into an adult.  The wolf’s wife had a set of twins one was a wolf pup and the other was a little boy.  The family was very happy

The brothers lived long lives together.  They still went everywhere side by side.  The twins found that hunting was much better when one of them had four legs and mighty teeth.  It was also easier to retrieve water fowl and the ends of fishing nets.  The dog brother didn't mind getting wet even when it was cold.  The dog brother had wonderful hearing so he could tell the whole village when strangers were coming.  This continued for many generations and that is how dogs came to live with people.
Posted by Erin O at 8:47 AM No comments:

"Every time, thoughts of quitting come to visit my head and tagging along are Quit's friends, Not Good Enough, Who Are You Kidding, Can't, and Impossible." - Livin life

Cowboy Junkies
I have made quite a number climbs on quite a number of mountains, figuratively and literally. I guess maybe it is the time of year, that time where we are emerging from the dreariness back into the warmth and light that sends me into an introspective fit. I admit, I'm prone to these fits.

As I set my anchors wisely (I hope) and select my upward route, I will practice more patients and humility. I will continue to look up, to my left and to my right. I can only choose the route forward, I have already chosen what is behind me.  I will continue to look at the whole mountain and not just the fissures and crags right in my face. I must remember I am not alone on this mountain.

For now, I'll be reaching for the next hand hold on the wall. 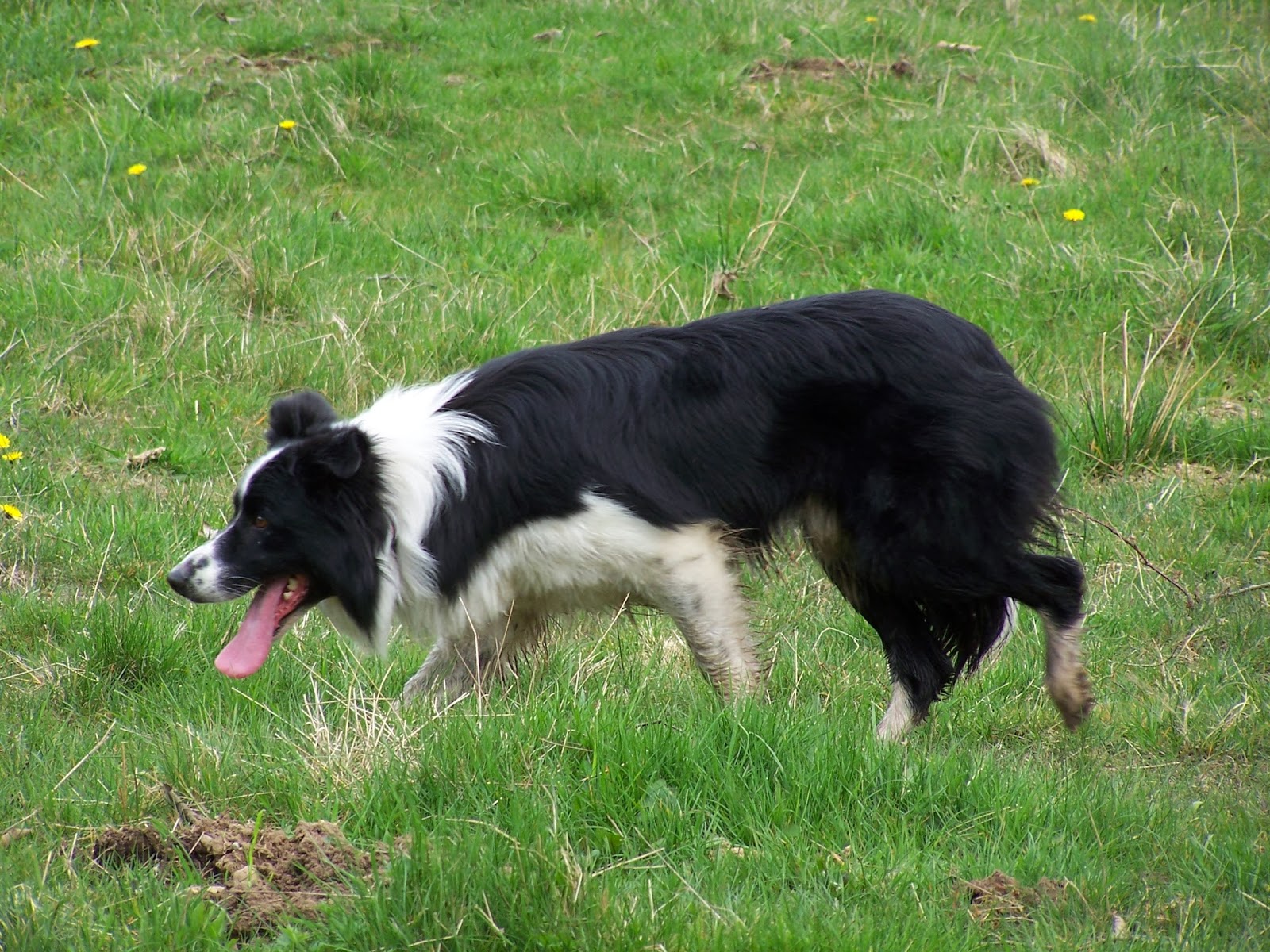 The words get caught in my throat every time I go to speak.  I have this indescribable hole in my chest, that is incredibly painful. It is always the hardest promise to keep, the same one I make to each of my dogs. It is always these moments that I feel so small and that just being there is not enough.  I lay on the floor with him and spooned like we had done a million times before, even then I still couldn't hold him close enough.  Whispered so many things to him and he just went easy and quiet, I know he was more ready then I was.

Really, there just are not any words or maybe really not enough words to say about this dog.  This dog with one eye, no functioning thyroid and Border Collie Collapse Sydrome, who had the biggest god damn heart, you would never know how sick he was for his whole life. Everything he ever did was with his heart.

He never said no I can't, even in his last days. He always enthusiastically said ,"Yes, yes I will go and do that for you I will try hard and will not give up.   I will work all day with you to set sheep for the trial and I will do the chores and I will run in the event. I will be try to be patient with while you learn."

There is no way I can ever pay back to him all that he has given to me and the dogs that come after him. We are all grateful and better for the lessons he taught. I am thankful that I understood the gift of him from the early parts of our relationship. There are so many things I wished for him, in way they came true when he crossed over.

Where ever he is he is no longer sick, my sweet handsome boy. 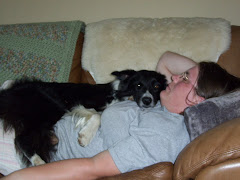